What Becomes of Gas Stations When Cars Are Electric?

A Look at Developments in Retail Real Estate 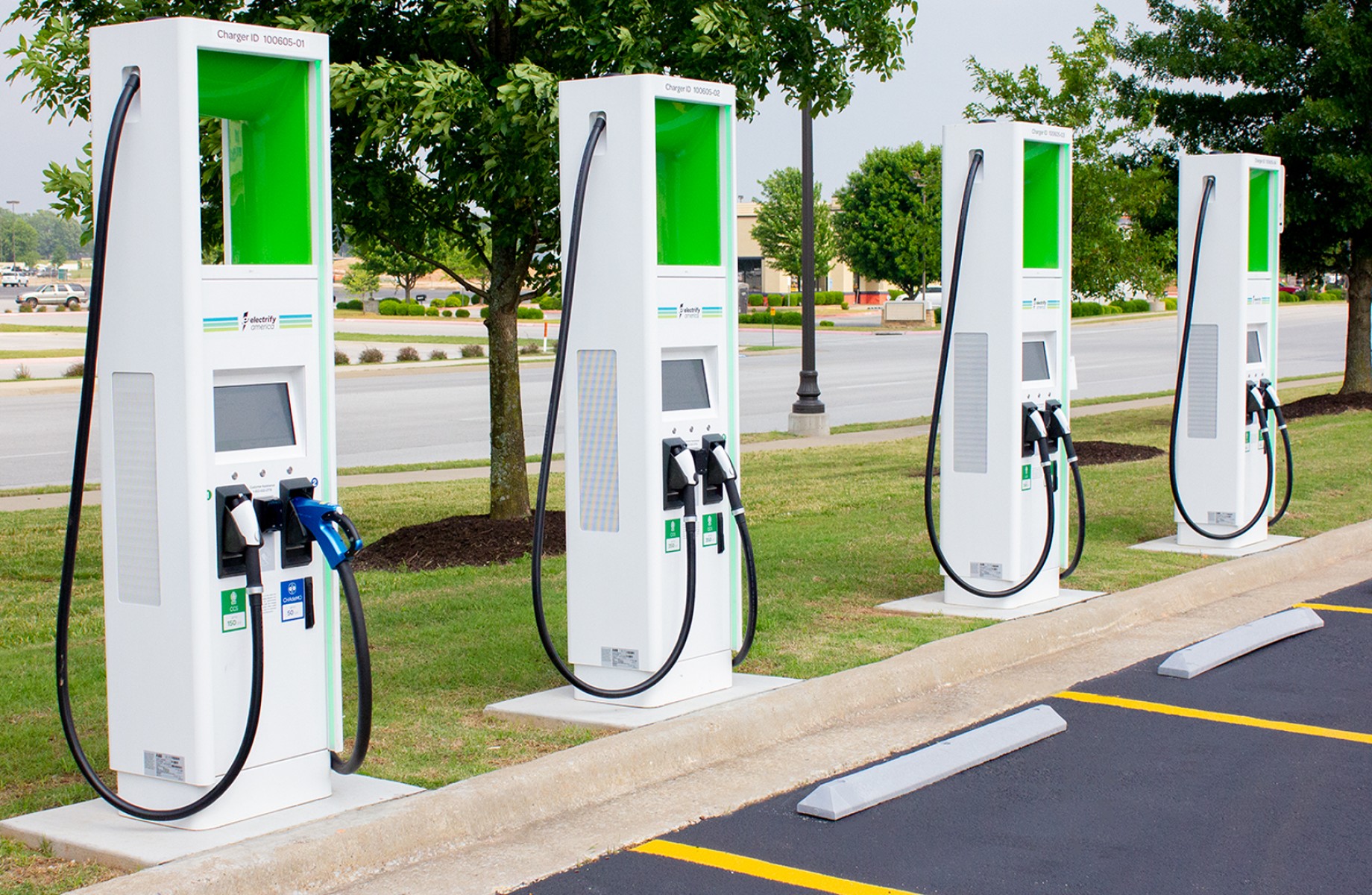 Electric-vehicle charging stations are showing up at suburban shopping centers and in parking lots at retailers such as Walmart. (Walmart)

So what happens to the roughly 106,000 gas stations in the United States if President Biden’s efforts to jump-start the number of electric-vehicle charging stations is a go?

The president’s sweeping $2.3 trillion infrastructure proposal includes $174 billion for tax credits and other financial incentives to first rev up automakers to build EVs and EV batteries, and then consumers to actually purchase them at costs that are far more affordable than they are now.

The proposal includes a plan to add a half-million charging stations in the United States, though millions will be needed, to address what’s called “range anxiety” among EV drivers, or the fear of running out of a charge before they reach their destination.

That offers opportunity and remedial headaches for owners of gas stations, 80% of them with retail, according to the National Association of Convenience Stores. Many could shift into EV charging stations but will need to rethink layouts and merchandise mix.

The locations and build-outs of most gas stations are at busy intersections or near neighborhood strips where tight sites include lanes to fuel up and get out in 10 to 15 minutes or less, even with a quick run into the attached store or fast-food restaurants.

“Fill up quick and make room for the next car is the underlying business model,” according to NPD Group, the market research firm.

That prototype doesn’t work for EV top-ups. Those cars need anywhere from 30 minutes to eight-plus hours to recharge, dependent on the battery size, how empty the battery is and the outlet’s voltage.

And, considering most EV owners recharge their batteries at home, a station around the corner isn’t likely to hold the same benefit as a gasoline fill-up station.

NPD Group expects charging stations in “more remote locations, away from an urban center, will likely have more real estate to expand into and be a welcome sight along the electric-powered journey.”

However, in dense urban areas that cater more to multifamily living than single-family, “public charging will be required, spurred by on-street and commercial garage parking demand,” according to McKinsey & Co., the management consultants.

“Retail-driven charging stations may also be part of the future commercial landscape: Several retailers are already giving customers the opportunity to shop while powering up,” McKinsey said. Charging stations are popping up at suburban shopping centers, malls, strip centers and parking lots ranging from Walmart to Whole Foods.

NPD expects future smart charging stations will have to offer more than pure convenience store fare, seeing more Starbucks-like shops where people can relax or work in an environment more inviting than the typical truck stop.

“Twenty years or so from now, we can expect that today’s gas stations will be far fewer and further apart, particularly as our need for charging changes, thanks to at-home, overnight top-ups,” Eddie Hold, president of NPD’s Connected Intelligence group, said in a report.

“But those that do remain should be an interesting hybrid of a reminder of a previous transportation era, a roadside attraction of sorts, while also supporting the modern future of EV power,” he added.

7-Eleven is already rethinking convenience store fare with its Evolution locations, testing grounds for the retail giant that also owns a number of gas stations.

The latest in what the company calls “innovations in a pioneering store format” opened this week in Prosper, Texas, about 40 miles from its headquarters in Irving.

These are not your father’s 7-Eleven stores, though Big Gulps are there. Here’s what’s in these new ones: tacos on handmade tortillas, frozen margaritas on tap, a stocked wine cellar and beer cooler, fresh-baked croissants and cookies, customized espresso drinks, artisan craft sodas, premium cigars in a cedar-lined humidor and more. The seven current locations even include mobile checkout and delivery.

By adding Laredo Taco Company restaurants to its stores, some with outside patios, 7-Eleven wants to change the world of convenience.

“You have to visit an Evolution Store to experience just how much 7-Eleven continues to raise the bar on product quality, selection and the overall shopping experience,” Chris Tanco, 7-Eleven chief operating officer, said in a statement.

Speaking of gasoline, prices at the pump fueled a huge jump in the consumer price index, according to the Labor Department.

The 9.1% leap in gas prices last month was the biggest contributor to the 2.6% CPI upturn, the largest in nearly nine years. On a month-over-month basis, prices of goods and services were higher by 0.6% as the economy picked up steam, good news for retail property owners.

That’s inflation all right, but it’s more situational than worrisome, according to the government. Remember this: These are comparisons to last March, when much of the nation went into lockdown mode as the grip of the pandemic began its forceful hold.

A year-over-year jolt like this was widely expected because, as most folks will remember, no one was buying much of anything except for paper towels, toilet paper and ketchup. Now, with money to spend from savings and stimulus checks, expect to see an even bigger leap next month from the Labor Department as consumers go out again.

And no need to worry just yet about a rise in interest rates, which is how the Federal Reserve typically responds to inflation that’s above 2%. Chairman Jerome Powell told “60 Minutes” Sunday it’s “highly unlikely” the Fed will hike rates this year as it expects the economy and job growth to accelerate “much more quickly” for a number of months.

“It will be a while before we get to that place,” Powell said about raising interest rates to slow down the economy.

We are pleased to present the absolute NNN Kum & Go located in a Midwest market for your acquisition review. The 20-year lease commenced in July 2017 and has approximately 16 years
remaining with 7.5% rental increases every 5 years. The next rental increase is scheduled for July 2022. The subject property is located at the signalized intersection of W. Jackson Street and N. 9th Street, adjacent to the Ozark High School and Junior High School campuses.

Contact Adam Levy at 312-698-9800 or alevy@kwcommercial.com for further details and to review the Offering Memorandum.

The Recovery Scores Some Easy Wins