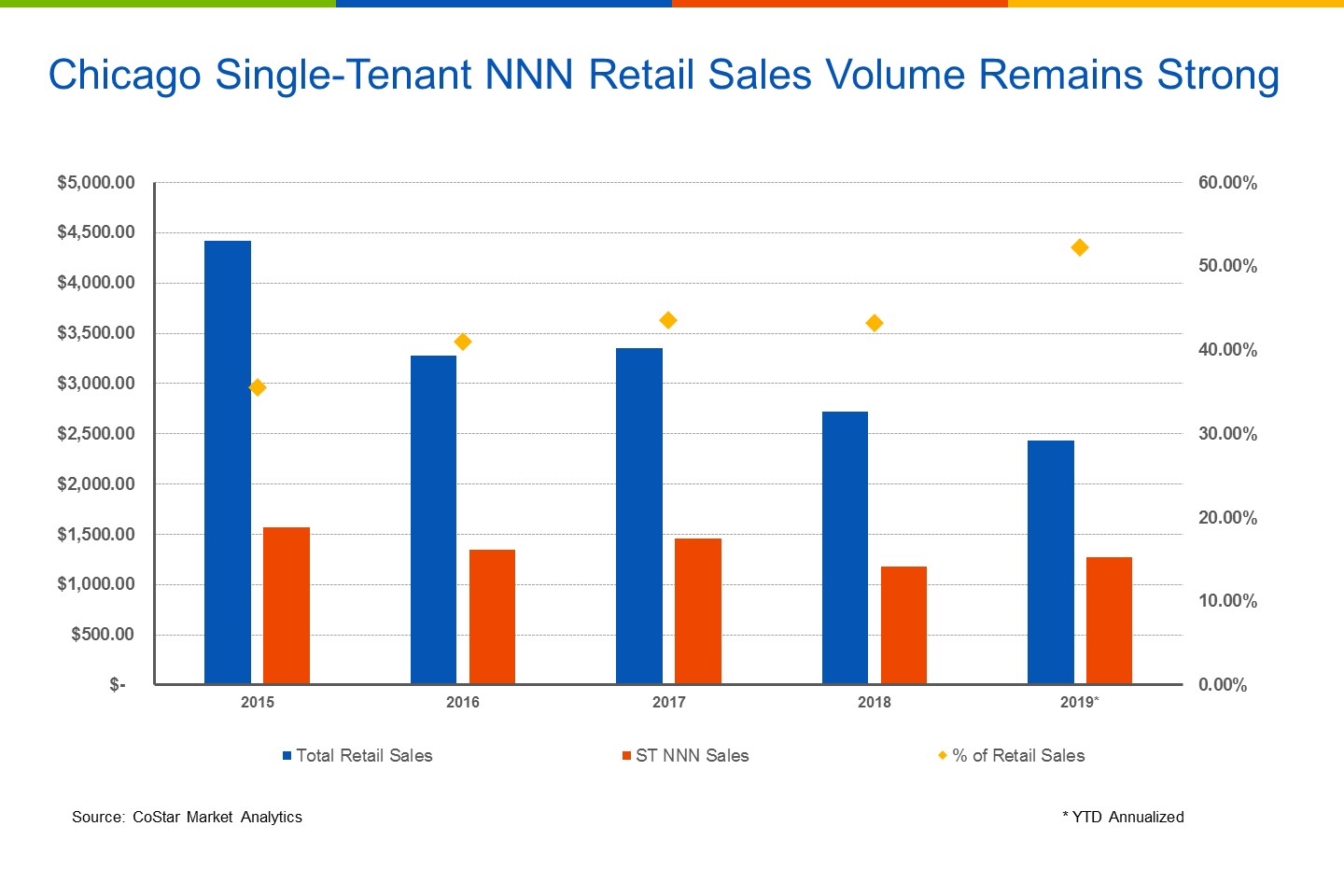 If there is one bright spot in an otherwise cloudy Chicago retail market, the single-tenant, net-lease sector is it, as sales have remained strong in the face of a broader slowdown in retail sales activity.

With approximately $1.8 billion of retail asset trades occurring in Chicago year to date, total retail sales volume is on pace to decline by more than 10% in 2019 relative to 2018. That would be the third decline in the past four years since the recent peak of $4.4 billion in 2015.

The sales slowdown has hit almost every segment of retail, including larger regional shopping centers, malls and smaller strip malls, with even the grocery-anchored segment slowing down after being a large contributor to retail sales earlier in the economic cycle that began with the end of the recession. The only segment holding strong is the single-tenant, net-lease sector, which has accounted for approximately $1 billion of total retail asset sales to date. This equates to nearly 55% of total retail sales activity this year, the highest level in the past 5 years.

Long favored for its “bond in a box” qualities, the single-tenant sector has become a darling for investors and banks alike. Investors have been drawn to the sector’s predictable cash flows, which are oftentimes secured by credit-rated tenants at yields higher than offered by those same tenants’ publicly traded bonds, despite similar credit risk and ownership of a real asset.

While their bond-like qualities lead net-lease capitalization rates to be highly sensitive to movements in interest rates, the current low-for-long environment, coupled with the prospect of further rate cuts from the Federal Reserve, have given investors confidence that the rate of return on investment will remain at, or near, record lows for the foreseeable future. In addition, contracted rental escalations that often exceed the rate of inflation provide a level of cushion should cap rates rise.

An additional catalyst to the strength of single-tenant, net-lease sales has been 1031 exchange investors, who are naturally drawn to the hands-off, bond-like qualities of the segment. The 1031 exchange allows investors to defer capital gains taxes from the sale of real property so long as the proceeds from the sale are put directly into the investment of like-kind property, subject to timing limitations. Thus, the length of this economic cycle has driven a 1031 sector that is flush with recycled capital currently seeking out exchange properties.

Lastly, commercial banks, being well aware of the struggles in the retail sector, have generally taken a risk-averse approach to speculative new construction and struggling secondary retail properties. However, single-tenant net-lease retail provides a much less risky way to maintain their commercial real estate loan exposure to the retail sector. Thus, while the retail sales slowdown is unlikely to reverse course in the near future, low interest rates and significant equity and debt capital should help the single-tenant, net-lease segment continue to buck the trend.